Scientists have known for decades about an organ just inside the nasal cavity called the vomeronasal organ or VNO, and its sole function is to detect trace amounts of airborne chemicals called pheromones. 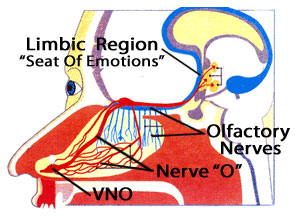 Researchers studying human pheromone response have focused on this tiny organ composed of two small pits a few centimeters inside the nasal passage.

Specialized nerve pathways now known as "Nerve O" lead from the VNO and run directly to the limbic region of the brain, bypassing the olfactory cortex.

These nerves were thought to remain dormant the majority of the time, but have now been confirmed to become active with a flood of measurable electrical impulses when subjected to specific human pheromones.

The evidence is undeniable: Humans do in fact respond to pheromones! Pheromones detected by the VNO have been shown in laboratory tests to send powerful signals directly to the limbic region of the brain, also known as the “seat of emotions”. This region of the brain is not directly connected to reason or cognitive thought patterns, rather it controls our emotions and sexual desires.

So, the stimulating feelings we experience from pheromones can be quite powerful. When these sexual and romantic feelings overwhelm us, our brains release a chemical called phenethylamine which in turn kicks on dopamine production and the next thing we know, the fireworks begin. This powerful cascade of events can happen in a matter of seconds, but the effects can last a life time. This is the phenomena commonly known as "love at first sight", and is well documented in the annuls of brain literature.

How To Apply Pheromone Advantage

When and How Often to Apply:

Pheromone Advantage is intended for daily use. A single application of Pheromone Advantage should remain effective for at least 8 to 12 hours. It will wash off while swimming or bathing, and will need to reapplied to maintain it's effect.

As shown in the pictures above, Pheromone Advantage works best when applied to the exposed surfaces of skin such as the back of the neck and forearms. After applying to the skin, the remainder can be rubbed into the hair for greater effect.

How Much to Apply:

To apply pheromone advantage, simply dab a small amount onto the tips of your fingers. This product is highly concentrated and works in small amounts. You do not want to slather Pheromone Advantage on like lotion or sunscreen. Think of it more like a cologne or perfume, even though it's not scented. The application amount would be about the same. The amount that would be absorbed into the tip of a cotton swab should be sufficient. Over application is not recommended. In high concentrations pheromones can have an unpleasant odor to some people.

A few of the common Uses for pheromones at home, work or for going out:

1.) Unscented -- Pheromone Advantage is virtually odorless and can be worn with your favorite cologne or essential oils. Other pheromone products double as cheap cologne with unpleasant odors.

2.) Actual Human Pheromones with Superior Quality -- Pheromone Advantage is made with true human pheromones of the highest quality. The sad truth is that many inferior pheromone products use plant or animal pheromones that are ineffective on humans.

3.) Three-In-One Pheromone Formulation -- No other pheromone product combines three human pheromones in one formula. Almost ALL other inferior products at best contain only a single pheromone. By combining all four of the most powerful human pheromones known to be effective in stimulating attraction and sexual urges, this formulation leaves nothing to chance by activating the VNO in every possible way.

4.) Super Concentrated For Maximum Effectiveness -- Other pheromone products that actually use a true human pheromone lack sufficient concentrations. In contrast Pheromone Advantage has been specifically formulated to emit effective levels of all four pheromones for 6 to 12 hours after application. No other pheromone product can make this claim.

5.) Non-Alcohol Based -- Again, almost all other pheromones products strictly use alcohol based suspensions, and when applied to the skin they evaporate almost immediately. Pheromone Advantage is only 10% alcohol and 90% DPG (a water soluble solution) and is designed to diffuse evenly throughout the 6 to 12 hour range of effectiveness.

6.) 6 Month Money Back Guarantee -- If in your own sole judgment you are not convinced that your Pheromone Advantage formula was worth every penny and more, you have 180 days to simply return the unused portion for a full and complete refund - no questions asked! If you are not thrilled, you don't pay - PERIOD!