human pheromones are bending the laws of attraction 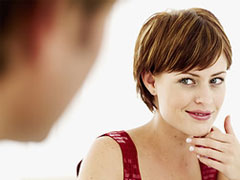 Human Pheromones Are Bending the Laws of Attraction

What drives one person into the arms of another?  According to human pheromone expert, Dr. Virgil Amend, dating and mating is highly influenced by pheromones, powerful air-borne chemical hormones produced by the body that fill the air around us to attract the opposite sex. Or, do they?

It has been long understood that nearly every species in the animal kingdom produce and sense pheromones, including humans.  You can't see them or smell them, yet they can be powerful enough to instantly draw another person like a magnet.

"Humans naturally produce their own pheromones." Says Dr. Amend , "However, our cultural habits can wash away, distort or hide our natural pheromones with frequent bathing, detergents, antiperspirants, etc."  Our natural pheromones largely go unnoticed as evolution has not yet adapted to modern life styles.

However, by applying a few drops of a topical pheromone supplement on the exposed areas of skin, such as the neck and forearms, both men and women can replace natural levels of their own gender appropriate pheromones.  Lasting several hours, the pheromones permeate the air, giving their sex appeal a real boost.

Dr. Amend explains, "Scientists have known for decades about an organ just inside the nasal cavity called the vomeronasal organ (VNO) that contains specialized nerve receptors to detect pheromones. What's quite interesting," Dr. Amend continues, "Is that it has been recently discovered that a specialized nerve pathway, known as ‘Nerve O,’ runs directly from the VNO to the limbic region of the brain.  This area of the brain is responsible for our emotions and passionate desires. This discovery helps explain how pheromones trigger the attraction response.”

This new evidence tells us that humans do, in fact, respond to pheromones just as animals do, and the best part is this response can be triggered intentionally.  A precise concentration of pheromones can kick off a rush of chemicals in the brain within a matter of seconds, and can make people feel a strong emotional and physical response. "The next thing we know, the fireworks begin," says Dr. Amend.   "These formulations can produce that response, and while the chemical cascade may take mere seconds to occur, the effects can last a lifetime."

This evidence has been tested and borne out in various scientific studies on animals as well as a famous "twins" study done by the ABC News show 20/20.  To test whether pheromones really work 20/20 sent one set each  of identical male and female twins to a speed-dating event,  and gave them each a scent - one twin in each set received a scent containing pheromones. No one knew who had what.  They went on 10 dates each lasting five minutes. The daters then completed forms stating which of the people they would like to see again.  At the end of the evening they tallied the results: Nine men wanted to see Sarah again and five men wanted to see Bridget again. As for the guys, 10 women were interested in Dave and only six women were interested in Paul.   Sarah and Dave were wearing the pheromones.

"Attraction is really all about chemistry" says Dr. Amend, "After all, men and women have been programmed from the beginning for one basic purpose … and that is to reproduce. These formulations merely tap into the power of nature's chemistry by triggering the signals every person is programmed to sense and respond to".

What does that mean? Well, according to Dr. Amend, and to thousands of repeat customers, it apparently means more flirting, more dates and more passion.
The two Pheromone Advantage formulas, one for men and one for women, blend the most powerful pheromones appropriate to activate the VNO organ in each of the sexes, and each formula is concentrated to insure best results.

Today, Pheromone Advantage is available and ships in a very discreet, unmarked package. It comes with a 6 month unconditional satisfaction guarantee - if you're not satisfied in any way, we will refund the entire product price with no questions asked. Click here to learn more about how pheromones work and to see how you can get a 30-day supply of Pheromone Advantage for just $49.95.